I am stronger than I have been for a while. I guess the damage done during the stress of being homeless all those months after moving has finally been overcome somewhat. The spring weather has been beautiful this year and I have reveled in being able to enjoy it again. I am not well as you would recognize it. That can never happen again but within the cocoon of my life this is a better time and I am smiling a lot and enjoying the people I bump into as I get about! 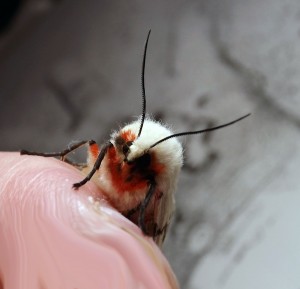 The moths are back fluttering about the lights and through the night grasses. The pretty little thing to the right is a ‘Light Ermine Moth‘ that was hovering about the driveway light the other night. Now that I have extended the chores I attempt the energy to process the moths and get them into Project Noah is a bit more difficult to come by but it is a challenge to identify them and a pleasure to be able to contribute so I will keep slogging on.

Among the things that have crept into my days in an attempt to fill those long lonely hours when I am not well enough to be out and about are the radios. I have covered them quite well already and their progress is ongoing. The 477Mhz CB hand-held is working well although it has a lot less range than a mobile unit. Part of the reason for getting the small one was to evaluate the possibility of going up to the larger one but I have not decided yet. The handheld is certainly working but this apartment is in a black hole. I have to believe that the big commercial television repeater tower on the hill is blowing some of the radio potential away because this place is incredibly free of decent signals. I just cannot assess if investing in a stronger radio transmitter will actually improve anything on 477Mhz or if it is worth it anyway as there isn’t much traffic. 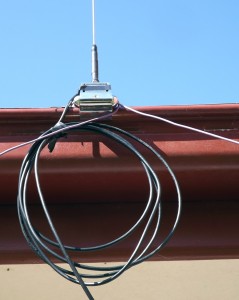 The 27Mhz system is the old CB everyone used back in the 1970’s. The 477Mhz is line of sight meaning that unless I put the antenna up the six storeys it will take to get over the apartments up the hill there will not be much benefit from a bigger radio. Basically the radios shoot their signal along a straight line and are best used between four wheel drives and so on because they do not interfere with distant users in other valleys etc. The 27 megahertz however can bounce all around the world off the ionosphere and a transmitter may be able to be heard in many countries. The signal is complex and antennas are important although  a whole bunch of different kinds can be built by the user themselves and work well. In my case I have already started to fiddle with options of antenna tweaking but this spot is just a silent on these wavelengths as it was on the 477Mhz. It is a black hole. People are out there. I can just hear them in the background but so far I cannot contact them. One of the radio club guys has spent a lot of time with me over the one channel I can reach on the 477 (UHF) band. He has given me hints on antenna and tweaks and ideas for improving the performance and getting the radio and its cabling clean. That has been great. I had really struggled with the antennas as I have no ladder but after several months I have bought the gutter mounts over the internet via ebay, the cabling from Jaycar Electronics as well as the coax (cable) fittings. I managed to solder on all the fittings but it took quite a few attempts and my hands had blisters from burns all the way to the wrist. My left arm has become a bit dyslexic since it was busted up and will move enough behind the other arm so I only think the soldering iron will clear it. Ouch!!!

I am not sure if I will commit any more of my tiny budget to radios though. I love fiddling and I love making circuits and the challenge but this whole thing about being in a black hole for transmission and receiving takes the potential from it.

The ladder took ages to save up for with all the airline problems but it happened this week and immediately improved my ability to get things done. The antenna went up immediately and easily. The ladder came from Ebay and took a whole three days to deliver by courier. Amazing! In this tiny apartment the ladder sits wherever it will fit and is moved about the apartment all the time.

Finally, the lizards have aroused themselves since the days warmed up and imposed themselves on my life without any concern. They appear at my feet as though they want something and while I think I think they may be asking for mashed banana or pumpkin as they had last years I have not had either yet. They crawl over the couch while I am asleep on it and seem to love the crackle made by the blue tarpaulins I have on the floor under the scooter and under the easels. The couch has been moved so that the afternoon sun shines on the pillow and one of the lizards discovered it within minutes and claims it whenever it can. 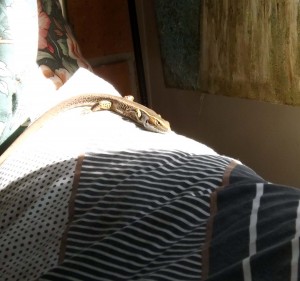 I have work to do and I am unwell but things are moving and the weather is great and it is not so cold and all the grieving for Bryan’s suffering is over. Even the pain is a lot less and there are times I feel good. Really good! And happy!

Let me take a moment to talk about that antenna system as shown in the picture on the left above. It is a 1.2m steel whip, ground-plane independent. That came from Karera at Tuggerah. That is the bit that sticks up. The bracket is (I lost the term but it is from the internet, E-bay) The coil of wire under the bracket is interesting. Each time the microphone was keyed it interfered badly with the stations on FM radio. I read somewhere that a few coils of the coax, hard against the feed point at the bracket, will change the way the radio waves resonate down the shielding of the cable (coax) It is called an air choke. Most of the ones on the internet are a set length and very neat with connectors and bits and bobs. This one is three or four loops in the feeder coax which shouldn’t work but does. It doesn’t get every bit of interference but it is almost gone and I am not going to get better at this stage with no other stuff to make a proper one.

The two purple wire are radials. There are only two and there should be four. The radio club guy said I should try two and see if it helped get a better signal. That is what they do. They form the ground plane that projects the transmissions at the ionosphere and increase the range and the propagation.. propagation is not the word. I must be tired my mind is blanking and losing terms again. The thing about this and some other types of radio is that you can play with stuff and experiment and try variations to get better signals and power. I don’t know yet. I love the radio game but this black hole thing. I would love to get further into it if my addled mind can handle the technical learning it needs to take in. Oh yeah, The wire radials are 15amp, 4mm plastic coated copper, 9ft long or whatever represents the length of a quarter wave of 27Mhz transmission. They are meant to be at 45 degrees of the horizontal but they are whatever I could get from the bits and pieces they are tied to.

The information about the simple Foundation License has been downloaded and I read through it. I may be able to handle that. I am pretty sure I have too many brain injuries to go another level but the Foundation may just be possible with enough effort. Have I finished? I don’t know, sorry if I have stopped in the middle of something I have run out of steam and need to rest!

Bryan Peach lost his battle to live last week. His funeral was Thursday the 24 September. Mum was supported by many of her family and many of his family also came. It was a good ceremony and showed him to be a much loved and respected man.

Mum has started to get her own medical up to date, She cared for Bryan for over a decade despite being very ill herself and with him gone she can see to her needs. She was expecting surgery on her tummy but when they tested to see how serious it was they stopped everything because her heart is damaged and needs to be stabilized before they can stress her body. My brother and I have suspected her heart was bad since she collapsed after organizing my fiftieth birthday gathering back in 2007.

The little dog goes looking for Bryan each time mum returns from going out and that breaks my heart. 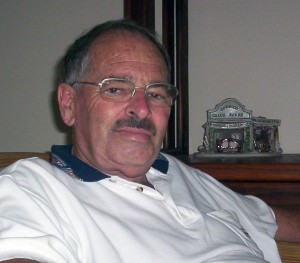