The crowd welled and parted as my mobility scooter slipped between its members. I used to feel embarrassed but these malls are built to force patrons into stress points and to make the journey along the outside difficult enough to drive people into the clutches of the internal mechanisms. I take no responsibility for the discomfort my presence in that system causes anyone. Every attempt to make my passing pleasant and non-threatening is made though. I actually like smiling at all those people and some of them seem to be lifted by a warm smile so I doubly enjoy it!

A man on exactly the same color and model mobility scooter caught my eye as he passed on the other side of the avenue. He made signs for me to stop and wait for him and then forced his way across the moving herd of people and slid alongside. Usually mobility scooter riders pass with their heads down and rarely they nod and smile so this was outside the envelope of normal. He put his hand on my arm as though to hold me in place, made some pointless small talk. and then unrolled the issue that had forced him to contemplate jamming the entire traffic flow of the mall.

“The library has flags for free.” He suggested motioning at the rear of my mobility scooter which was disgracefully free of flags or flag-like structures.

I knew what he meant. He meant that as far as he was concerned all scooters should be sporting those little orange polyester triangles with the orange fiberglass stick. He was wriggling in his seat with anxiety at the fact that there wasn’t one on my scooter. The library was open and about 100 yards away so in his mind he was saving me embarrassment and telling me where the secret stash of freebies was. That is not a thing to snub your nose at and I thanked him with genuine appreciation. I was on my way out and passing the library. I didn’t go in. After a while accepting the gift of everything that the world has to offer for free sends the message that you are cheap and lazy. Little orange polyester flags or even little plastic national flags are fine if you are happy to disappear into a background of worn non-entity. That is alright, particularly if you find your mojo another way or if you don’t care. I do. A little

The problem is that when you are handicapped and when you have been driven from society by greedy investors there is immense downward pressure to comply and disappear into the morass of powerless and landless serfs without rocking any boats.

I am also an artist and it is my duty to add just a little extra color to the day to day drudgery forced on us when we are locked into heavily conditioned breeding populations. The task is to create situations where people trapped in the drudgery of their own hard work and child bearing look up and see something they didnt expect. Something that makes them smile or think in some nonthreatening manner. It isn’t always totally non-threatening. The mass of suburban humanity often finds any difference to be threatening until they get used to differences occurring and they can enjoy it. That is a whole lot of pondering to explain the purchase of a 1m long Eureka Flag. The pondering isnt over yet however! Did I mention I was a founding member of the Australian Flagpole Association? That has to be worth something when I get to St Peter’s gate! 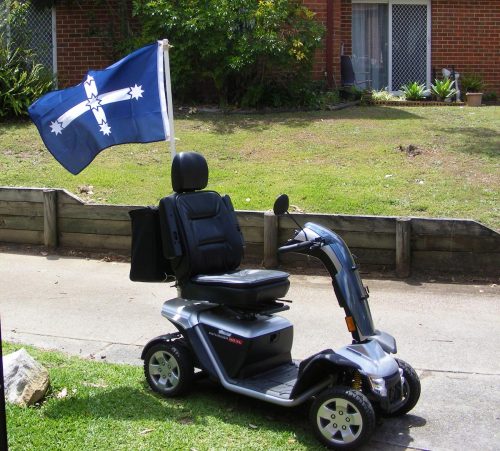 The flag pole is pvc pipe. It was a bit of pipe that was used to make a CB antenna and was chosen for the fact that its chemical composition didn’t cause any attenuation of the signal. This time it was chosen because it was white. The flag was obtained through Ebay but perhaps I shouldn’t have been surprised when the supplier was just down the road at Long Jetty. This is still the heartland for people who might want to wave a Eureka Flag. For my own part there is a still a tiny t-shirt store that sells one or two of my Eureka Flag products a year. Wesley Seward of “The Glownman Flags” delivered the flag himself (also flags2dye4)

The purpose of having flags on mobility scooters is to notify vehicle drivers that there may be something below their vision they should not run down. I have been developing a unit with a flashing light and car horn that should come into its own during the Christmas rush around that mall. The cars there are in a crush and people are tired and even a little frightened by the volume of traffic. They will not see a dirty patch of orange polyester in the moment they throw their vision left or right in the midst of banked traffic.

That is a tale for another day and if the unit ever gets built.

Back to pondering. The flag arrived with a large and free sticker sharing its package. Another free thing to help me decide how the world sees me. The thing about using the Eureka flag that worried me most was how many people might believe it was a statement of “white” pride. I have been beaten bloody and had my life trampled for decades by racists so while it is certainly still in my nature to stereotype some people, something like that could not form part of my identity. The people who created the paradigm served by the Eureka Flag were certainly racist. It was normal then. They didn’t express that part of their nature with this flag.

The sticker in the flag package was a large and good quality Eureka Flag sticker with the words “Aussie Pride” across it. I was a bit happier with that idea and wore the sticker on the side of the scooter battery box for a day. It troubled me. I could not define the reason I would have a sticker saying that on something of mine. I am not a proud Australian. I am not an ashamed Australian either. I don’t understand why I would be a proud Aussie when being an Aussie had nothing to do with me. I might be proud of spending three years fighting pain, disability and illness to pass through a university degree without the support of a single medical person but not of simply having appeared on this bit of the planet.

If I had a sticker to define the attitude that I see defining this flag and the days in which it was created it would read “stand against injustice!”