Wednesday 13th November an artist on the Central Coast of New South Wales in Australia is literally being brought before the people who will be his executioners. If they have their way he will have died a lingering death within a couple of weeks.

He is a seriously ill and handicapped tenant in New South Wales corporate housing. If you read past entries of this journal you will see how often he predicted this event and begged for assistance. The intensity and direction of the journal are a direct reaction to how many vulnerable people this artist saw driven to their deaths on the street so investors could enrich themselves further. The journal is this artist’s path through the unyielding world of human herding and the slide into nameless serfdom. There was never any doubt in his mind that he was going to die the same way if he didn’t change the way vulnerable people were unprotected in the hands of property managers and estate agents

On Wednesday, at Gosford. he stands before the assassins and the murderers. He is me of course. No surprise there.

When I watched 80 year old Betty try to carry her fridge on her back because she was so scared the effort of moving would kill her fragile husband I knew a terrible and cruel thing was happening. He did die during the move. She died shortly after. I have written that story elsewhere and every Australian should be ashamed.  I saw many fragile people die as they were thrown onto the streets so rents could be raised or properties could get value added blocks of apartments.

Now its my turn. If I was naive I would think that my community would not throw me out onto the street or force me to undergo the physical stress of moving knowing it will kill me. They didnt do it to one or two of us they did it to thousands already! This time I have a tiny voice that many of them didnt and regrettably I also didnt at the time and I am calling it as it is. If you initiate an event that you know will cause a death it is murder! Thousands of them so far. Now mine! It is very scary. When those Jews went off to Auschwitz it must have felt like this. When the academics were taken away in Pol Pot’s time they may have felt this deep sense of hollowness. When the Scottish tenants were dying in the Battle of the Braes they would have felt much better than this. They were to get a decent outcome even though they were busily getting their blood spilt by the land owner’s army. I am crippled and disabled and very ill. I needed someone I could trust to keep me safe and didn’t find it. I am helpless to defend myself from months of harassment and now its only two days to the clincher. Wednesday! 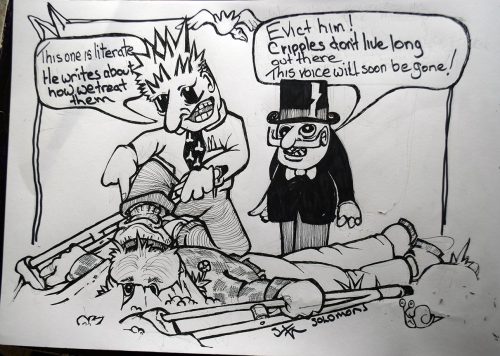 This entry was posted in Family and Community Sevices. Bookmark the permalink.